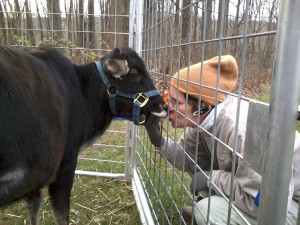 At the pony party last Saturday, Noah’s Ark made an appearance with some animals for a petting zoo. Among them was a zebu. What’s a zebu you ask? Good question!!! I call them miniature cows but that’s not exactly accurate. Here’s the Wikipedia definition: sometimes known as humped cattle or Brahmin cattle, are a type of domestic cattle originating in South Asia, particularly the Indian subcontinent. They are characterised by a fatty hump on their shoulders, drooping ears and a large dewlap. They are highly adapted to high temperatures, and are farmed throughout the tropical countries, both as pure zebu and as hybrids with taurine cattle, the other main type of domestic cattle. Zebu are used as draught oxen, as dairy cattle and as beef cattle, as well as for byproducts such as hides and dung for fuel and manure.